On April 21st, 2020, Star hosted a webinar with mobility industry leaders to discuss society’s interactions with Mobility — how it’s changed, new trends, and some bold, innovative ideas for the future.

There is always hype around new modes of transport, looking at only the letter H, the transportation revolution gave us hoverboards, Hyperloop, Heli-taxis, and maybe even HS2. These innovations are exciting, but we believe there is a much more interesting story. The evolution of existing modes of transport.

During the webinar, Star and a set of Mobility entrepreneurs focused on the evolution of existing modes; taking a look back, then gazed forward before deciding on an approach for success.

We focused on six mobility innovations from the past.

Another design that did not last was the onboard record player or highway Hi-Fi. Chrysler introduced this invention in 1952 so that drivers would not have to listen to radio commercials. While initially popular, Chrysler discontinued it after a year due to high warranty repair costs.

In hindsight, it’s clear which innovations were the winners. What made these ideas successful? They identified something users valued, integrating it into the driving experience and evolved with the times. When looking at the failures, there is no doubt that these inventors were smart people trying to solve legitimate problems. And remember these were the ideas that made it to production, the best ideas, how many other ideas were left on the cutting room floor?

As Mobility continues to evolve and play significant roles in our lives, understanding which innovations will be hits and misses are going to get much more complicated. Listen to this webinar recording to learn more.

As Mobility continues to evolve and play significant roles in our lives, understanding which innovations will be hits and misses are going to get much more complicated. Mobility providers will need to step up to the challenge of delivering new personalized experiences.

Star is continuously asked to think and talk about the future of Mobility. So allow me to share with you one autonomous enabled, non-social distancing, potential future from the perspective of a consumer.

A typical day in the life of a consumer

Now I’m sure there were moments in this dialogue when some of you might have nodded, and others thought, no way. I suspect those moments were not the same for everyone.

So in this complex future, how do we make smart choices?

In this complex experience economy, the approach to be successful is to focus on creating holistic user experiences. Stop thinking about specific touchpoints or features but instead reflect more broadly on how your brand can deliver an authentic personalised experience. This may not happen every day, but can be single significant moments or occasional pieces of small value.

One of our participants told us that they are working on the digital experience of a luxury vehicle. Although driving exposure is important, there are other necessary requirements; the desire to show off when you are not in the vehicle, the knowledge that your vehicle is safe and where you expect it to be – peace of mind.

There are many different versions of Daisy’s story based on a range of different assumptions. Whether you believe this version or another, it is possible to see a set of underlying trends.

For us, the important trends are:

Being able to observe these trends helps, but we are still a long way from knowing which innovations are likely to be hits and misses.

The Mobility revolution is here to stay! Do you as a Mobility provider want to know how to step up to the challenge of delivering new personalized experiences? Check out his new webinar recording for some key insights.

There have always been winners and losers in the way we interact with vehicles. This is going to get harder in the future as demands and relationships shift.

To be successful, focus on creating a holistic relationship, understand the state of the enabling technology, and plan to adapt and evolve.

Be critical, assume that you won’t get it right the first time. We need to be flexible in the way that we develop software and contract with vendors to allow experimentation and evolution. Because it’s somewhat ironic that as the rest of the world uses a vehicle metaphor for MVPs and evolution when the automotive world still focuses on outdated approaches. 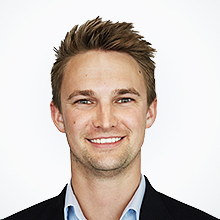 Sam Hunt is the UK Director of Technology at Star and a member of the Tech London Advocates working group on Corporate Innovation. Sam believes innovation is the art and science of solving the problems that matter. His mission is to unlock innovation for the success of our clients. Sam brings with him 10 years of experience across corporate innovation, startup ecosystems, emerging technology, and RnD. Having a unique mix of business and technical knowledge, he creates and implements game-changing solutions.

Mobility has gone mobile, and there’s no shortage of mobility apps to choose from. Find out how to make your mobile app stand out in a crowded field.
Read more